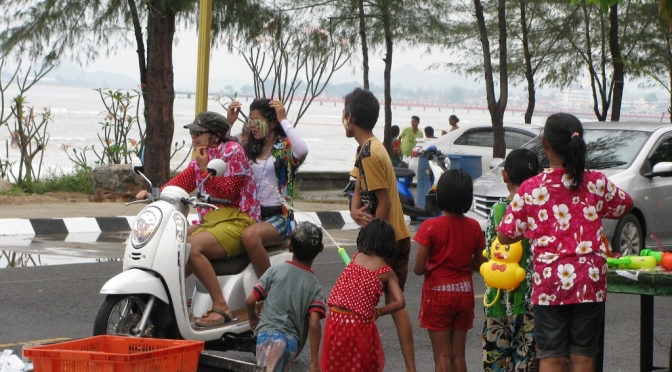 When we first arrived in Prachuap, we had only paid for 2 nights because the owner said that for the 13th (what would have been our 3rd night) all the rooms were booked.  You see, Songkran, the Thai New Year (also known as the Water Festival) was just around the corner so many Thai’s were traveling to their favorite vacation spots to celebrate the occasion.  So while for the first day here was simply spent lounging on the beach, the second was dedicated to trying to find somewhere else to be for the night of the 13th.  As we wandered the main road trying to find accommodations for the 13th (and were constantly told ‘no space’) we kept thinking more and more outside of the box with suggestions like “well, if it’s only for that one night that there’s no availability at the Ban Thai Hut, then we can just ask if we can store our bags there and sleep on the beach!  No worries!”.

As fate would have it however there WAS space at our hut, it was just that the price was going to be increased for the nights of the 13th and 14th.  Of course for Holidays they would up the price…  Even though the price hike was annoying, it was really a God-send that we didn’t have to go anywhere because on the morning of the 13th (when we would have had to pack up and move locations) we woke up to an absolutely HUGE thunderstorm that rocked on with lightning and thunder for most of the day.  We kept laughing at the prospect that we had thought to sleep on the beach… Lol! 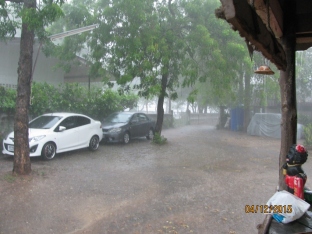 April 14th was the official day to celebrate the Thai New Year.  However in most places, especially larger cities such as Chaing Mai and Bangkok, they choose to celebrate for an entire week.  Songkran, as mentioned above is also known as the water festival, and is aptly named because for the duration of the celebration days of Songkran people go crazy with water fights!  Buckets of water are thrown on passersby, cars, motorcyclists, bicyclists, basically anything with a pulse (though they don’t target the dogs thankfully!! :)).  If you aren’t hit by a bucket of water, you will be hit by a hose, or a water gun, or by a truck driving by with people in the bed of the truck chucking out water all around.  It’s absolute water mayham!!  I loved it!!!! 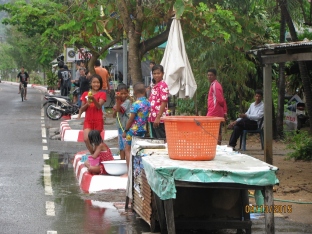 There are a couple of confusions surrounding the Holiday however…  Well, the first isn’t a confusion as much as a concern really.  But apparently the number of motorcyclist deaths DOUBLE each year during Songkran because of crashes related to people chucking water on them while they drive!!  I did see a news report from Bangkok this year however saying the death toll was down more than 20% from last year, so that’s good…

Getting into the actual confusion bit about the Holiday; Songkran is the Thai New Year.  Yet on January 1st, their year turns over.  They went from the year 2557 to 2558 on January 1st.  So………..  The question remains in what way is Songkran the Thai New Year?  I have yet to have this explained to me nor to find anyone who actually knows the answer to this (and I refuse to Google it just yet as I’m curious to actually find someone who knows).  What I have heard from some is that Songkran is more of a “last chance” for water “festival” meaning that mid-April marks the beginning of their dry season where not so much rain can be expected for months until the monsoon season hits…  Still confusing is that they also celebrate the Chinese New Year… So essentially it seems in Thailand that they celebrate the Western New Year (January 1st) when their physical calendar year also changes, they celebrate the Chinese New Year, AND Songkran which is their “actual” New Year and/or perhaps just a water celebration before the dry season…  Anyone else confused? 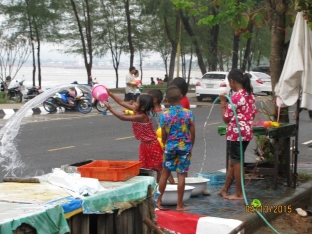 Moving along, the actual day of Songkran (April 14th) was overcast but not rainy and in this sleepy little town of Prachuap, it was rather low-key.  About a 5 minute walk from our place were 5 kids set up on the side of the road equipped with a hose, large buckets, smaller buckets (for use to chuck water) and several water guns.  When there wasn’t any traffic to pummel with water they simply turned on each other or scooped up small buckets of water to pour on themselves, lol!!  It was great fun watching them and all the smiles on the faces of those going by who were hit with water.  And it was even more fun watching the random truck pull up and start a water fight from the bed with the kids on the street. 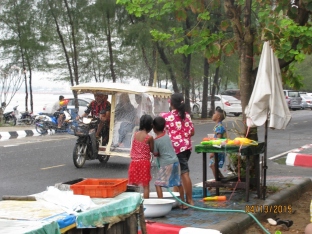 All in Good Fun

We watched this activity for several hours drinking beers and chatting in between.  At one point I went back to the hut for my camera and saw some guys painting each other up with some festive paint (a new part of the Songkran tradition apparently) and after asking if I could take their picture, they proceeded to give me the blessing of slathering some paint on me too 🙂 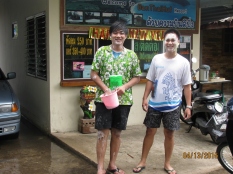 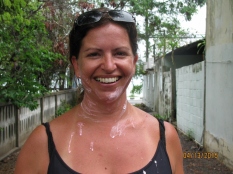 Back at the bar where we were drinking, we met a couple for the UK who had been living in Prachuap for a while, and they invited us to “the wall” for some more drinks.  The Wall is literally the sea wall along the main road of Prachuap on the South side of the pier that splits the bay.  We had yet to go to that side, so took the opportunity (in our already quite intoxicated states as we had missed eating breakfast and lunch) to go.  We hoped in the bed of the truck and headed over to the wall.  I was furiously trying to take pictures along the way and totally neglected to think about the prospect that while the Songkran celebration was quite docile along our little local strip of the bay, it would potentially not be the same on the other side of the pier where it was known to be more touristy. 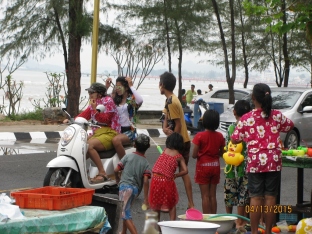 En Route to The Wall

En Route to The Wall_2

Just as we pulled up in the heart of the area we had to stop in the road because of traffic.  It was then that I realized how much celebration was going on and tried to as quickly as possible to put my camera away when I was hit from head to toe with a bucket of ice-cold water!!  Yup, they don’t care what you have on you, what you are wearing, what precious things you have that you may not want to get wet; if you are out and about, no matter your state, you will be soaked!!  They even have special bags they sell for phones and tablets so you can take pictures but keep them dry, lol!!  I was soaked and my camera also got hit through, but in the spirit of it all (I was warned it could happen) all I could do was laugh and enjoy the great cheer!  But needless to say the picture-taking came to an abrupt end!! 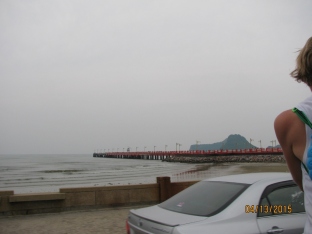 En Route to The Wall_3

En Route to The Wall_4

En Route to The Wall_5

En Route to The Wall_6

En Route to The Wall_7

En Route to The Wall_8 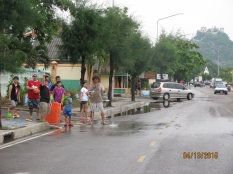 En Route to The Wall_9 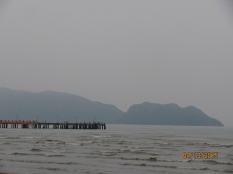 We got some more drinks and I purchased a roll of toilet paper to dry my camera with and simply sat on the wall chatting for hours!  The conversations lasted long after the sun went down until we were past the point of being in any way sober and were then in desperate need of food!  We parted ways with our “wall” friends and headed to find food and pass out accordingly.  Good times!  Another Happy New Year it was! 🙂

On to Wat A Cave!

Australian Traveller that loves to "Roam" our globe, creator of ENDLESSROAMING.COM sharing the experience through word and photography. Currently residing in my home of Newtown Sydney