Many days after my morning Muay Thai Kickboxing workout I’m left exhausted wanting to do little more than just relax with a book or have a massage.  The best remedy for my sore body (especially my feet) however is to walk.  I really have to rev myself up for the task however.  Especially since the walking includes doing so during some of the hottest hours of the day.  Usually I head to Hin Wong for a snorkel or Sairee to just hang about but this time I thought to check out a new route.

My initial plan was to head to Jim’s bar.  Located high up on one of the hills nearby, it seemed like it would be a nice ‘goal’ place to walk to and to be rewarded in the end by a cold drink and hopefully a beautiful view to boot.  Armed with my plan I headed out toward Hin Wong bay but made a turn at the top of the hill toward Jim’s bar instead of heading down to the bay.  The walk there wasn’t altogether unpleasant.  Though there were bits with a 20% or 30% grade to them, the majority was variable enough to cut the monotony of just walking uphill.  Bits of the path were concrete while other bits were only dirt and gravel cut through with erosion from storms.

Though it is possible to make the trek with a motorbike or an ATV, I prefered walking.  First because of the exercise aspect, but most importantly because of the condition of the unpaved bits of the path.  They really were quite treacherous and while during my hike up I didn’t notice any accidents, on my way back down I witnessed 2 rolled motorbike accidents (one with injuries) and heard from another person that he’d witnessed 3 as well!  But I’m getting ahead.

It felt like I had been walking for hours!  No one was in sight except the occasional random passing motorbike and the sun was beating down hard on my skin.  I took appropriate breaks here and there to chill in the shade and have some water or take pictures of the local wildlife (I spotted a water monitor!!) and though I was absolutely dripping in sweat to the point of all my clothes being soaked through, I trudged on having no idea how far or close I was, yet determined to get there.  Eventually (after going up the 30% grade bit of the path) I made it to a little bar.  It turned out to be the Butterfly Garden!  That was good news for me since Jim’s bar wasn’t too far beyond that. I stopped for a sugary tea to replenish a bit of energy then continued up the hill to Jim’s. 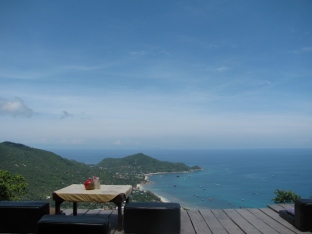 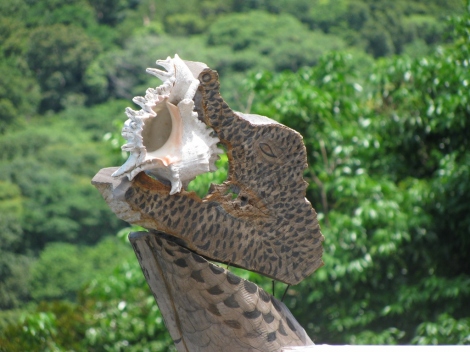 I was surprised that Jim’s wasn’t that far at all from the Butterfly Garden since on the map they seemed to be a bit further apart.  It literally was just up the hill from the Butterfly Garden.  While it was a cute little bar, no one was there and the views were simply of the surrounding jungle.  So instead of sitting and staying, I opted to check out a bit further along the path.  There were signs for the Mango View Bar and another place simply called The View Bar.  One was down the path to the right, the other to the left.  I chose the right path toward The View Bar and about half a km later, I’d arrived to one of the most stunning views of the island I’ve seen so far!  You could see just about the entire island including the National Park islands to the South of Koh Tao, a bit of Koh Samui to the SW and even the mainland of Thailand!

So stunned by the beauty of The View’s views, I took a seat on the patio and ordered a drink.  I learned from the owner that the place had only been open for 5 months now, the deck I was sitting on was only a month old and the bar itself is the highest bar on the island!  There was only one other couple there when I first arrived which gave the atmosphere an even more peaceful and beautiful appeal to it.  I met Suay (beautiful), the local squirrel who would pop in every time it was hungry for some fruit.  He ate out of the owners hand but unlike other squirrels I’ve seen, he didn’t live in a cage.  He simply came and went as he pleased 🙂  He did come over and sniff my toes at one point during his search for some more food, but sadly my camera didn’t reload fast enough to capture the shot 😦 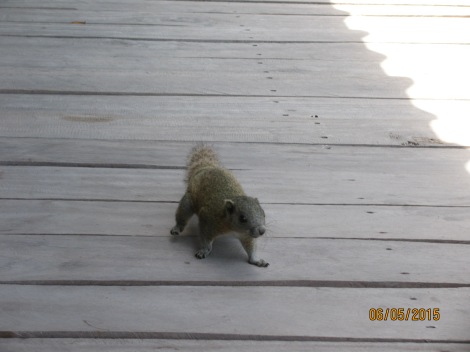 I spent hours up there sipping on drinks and chatting with people as they came and went and was reminded just how international Thailand is.  Within the few hours I was there I met people from Spain, South Africa, Norway, Germany and the States.  Quite an impressive mix!  In any event, the day was moving along and it was time for me to start heading back along the 3.5km path back to my place.  As I came back into view of the Butterfly Garden however I was coaxed into staying for “just one drink”.  “Have a beer, kick up your feet!  Free view!” the Thai’s were calling to me.  And though I had been kicking up my feet for several hours I thought, why not?  So I settled in for a beer and started chatting with the locals who owned the place and a tourist from Canada. 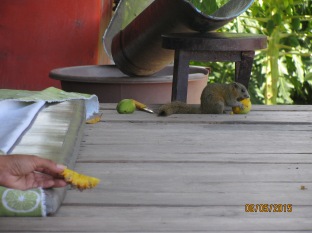 It was then that the local said they were going to have a barbecue.  And the main meat of this barbecue??  Locally caught and freshly killed bat… Yes bat!  I LOVE bats!!!  Ok, not in the eating sense but I love those cute little critters!!  I’ve loved them since caving in college and have always adored their little furry faces!  So when he pulled out the bodies ready to be put on the barbecue, I couldn’t believe it and figured there was NO WAY I’d eat a bat!  Alas, after 2 beers (why not have 2 when you’ve already had 1??) I thought, yea, I could try some bat!  The meat was very tough and quite hard to pull off the bones but it was flavorful.  I only had one wing however as I started to feel a bit guilty for having eaten one of the cute critters, but at least I tried something new.

I ended up staying for another couple of hours at the Butterfly Garden having beers (3 in total, I promise!) chatting with people coming down or up the road, heckling them to stay for some bat, doing some Muay Thai play fighting with one of the locals who then invited me back everyday to practice with him for free, and sadly witnessing 2 motorbike rolls (one resulting in a nasty road rash injury).  After my 3 beers however, the sun was really starting to set and it was definitely time for me to head back down (I still had 3km to go!) before it became pitch black.  I thanked my new Thai friends for the bat and conversation, and headed down the quickly darkening path back toward town.  I won’t lie that I kept thinking how idiotic I was to have waited so long to go back down as the path became darker and darker.  But, all’s well that ends well, and my hike down the hill was thankfully without injury!

I made it to the bottom of the hill just in time to see one of the most stunning sunset skies I’ve seen since being on Koh Tao.  I wish the picture I took did it justice, but really it doesn’t.  Unfortunately my camera doesn’t take night shots well at all!! 😦  All in all, it was a beautiful day full of unexpected people, experiences and breathtaking views all around.  And on top of being thankful I’d made it back home in one drunken piece, I was also so very thankful that I’d made myself get off my duff that morning and make that hike in the first place.  I will definitely have to go there again!

On to Muay Thai Kickboxing Training

Australian Traveller that loves to "Roam" our globe, creator of ENDLESSROAMING.COM sharing the experience through word and photography. Heading to the USA this coming June