While there are several fabulous things to do while in Prachuap Khiri Khan, Thailand, perhaps one of my favorites was visiting the Ao Noi Wat.  ‘Wat’ simply means Temple, but what sets this one apart from every other Wat I’ve been to so far is that it is located inside a cave!  In college I took a biospeleology class in college where we went all over the state of Texas and even into Mexico to different caves and the idea of finally getting back into one was thrilling!  Mind you, this particular cave wasn’t one that required to wiggle on your belly to get from one point to the next as it is quite large and easy to simply walk through.

I headed out about mid-day on my own to track down the Ao Noi Wat with a bottle of water, my camera and favorite all around walking shoes, my Keens.  The walk there really wasn’t all that interesting per se, since it literally was just walking along the side of the road.  The views however became more and more breathtaking as I got closer to the Khao Ta Lai Forest Park.  The beauty of the hills jutting out from the ocean was so beautiful and picturesque, I had a hard time continuing without stopping to take a gazillion pictures!

Turn off for Wat Ao Noi

I walked past the over 150 year old fishing community of Ban Ta Monglai toward the Ao Noi community as the sun beat down on my skin making me wish for shade!  I knew I was going in the right direction, but I also knew the Wat was located in a cave, so some form of hill had to be ahead.  But as I walked past the fishing community and the Khao Ta Lai Forest Park, the hills disappeared.  The only ones visible were about 11 kilometers away in Myanmar (Burma)!  I continued to trek on however stopping every now and again to ask locals which direction the Wat was, and armed with the confidence that even they were still pointing for me to continue on, I figured some hill structure would have to show up soon.

Turn off for Wat Ao Noi_2

As I didn’t have a watch with me, I honestly don’t even know how much further on I walked until some hills became visible again and until I finally hit Wat Ao Noi.  I was drenched in sweat from the sun and had been guzzling water as if my life depended on it (which let’s face it, it does!).  Finally I arrived at the base of the Wat and started an over 300 step climb to the entrance of the Wat.  The views of the town and beaches as I climbed were spectacular!  I will say that while most of the stairs up were in good condition, there were a few bits that had me worried as they were split in half and sliding toward the edge of the cliff.  Up and up I went until finally coming to the entrance where a box with 2 rechargeable flashlights sat.  A little sign said they were for the borrowing, and just to plug them back in when done.

Start of Steps to Wat

View from the Top

Of course, the one thing I SHOULD have thought and known to bring (a flashlight) I didn’t, so it was really quite nice that they provided them there :).  I headed into the cave armed with my flashlight out of the sun and into the darkness.  I was literally the only person in the Wat and I won’t lie, at some points little bits and flashes of the movie “The Descent” went through my mind that at times freaked me out.  An especially heart-pounding moment was after I left the only naturally lit area of the cave and headed to the first reclining Buddha.  As I grappled with my camera while attempting also hold onto the rather large flashlight, the light flickered on something alive on the cave floor.  I immediately scanned the light back to what I had seen to discover 2 little black dogs!!  They lived in the cave!! 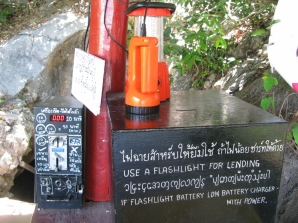 Stranger in the Dark

Stranger in the Dark_2

I sighed a sigh of relief upon seeing them as I called them over for a pat, but then had another second of slight panic as I wondered whether they could be rabid!  I mean, bats can carry rabies, bats live in caves and who knew whether the dogs had been vaccinated or if anyone actually took care of these dogs…  Luckily however they were very friendly and showed no signs of being rabid and quite frankly their presence made it easier to be the only one in the cave.  Because surely if some crazy creature crawled out of some crevice to attack me, they would bark first to alert me, right?? 😉 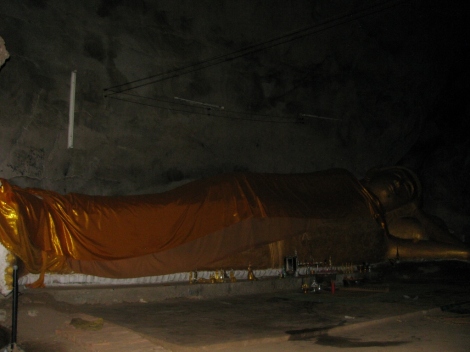 I carried along the length of the cave past the first reclining Buddha and to my surprise found a second next to a series of about a dozen large Buddha’s in seated position.  Along to the right of the seated Buddha’s was another walkway that led to another large area where tons of visitors had stacked rocks in a variety of patterns, making their mark to show they were there.  And in the very back of this last large room sat yet another Buddha watching over the whole show.

I spent probably twenty minutes (it’s not THAT large a cave) walking around and searching for various other avenues to explore while listening to the nothing sound of caves, linked in with little chitters from bats above every now and again.  I will say my favorite thing about caves is the nothingness.  There is no sound most of the time and when the lights are turned off, you could hold your hand an inch in front of your face and still not see it.  There is such a peace about caves that is so very hard to find anywhere else and being back in the environment again was so very delightful.

As I headed out of the cave, my two little protectors followed.  At the entrance I noticed that indeed there was dog food scattered about the entrance around two blue dog bowls (I hadn’t noticed this detail before) but I also noticed there didn’t seem to be any water source for them.  As one of the dishes was empty, I poured it full with water.  One seemed to be quite thirsty, the other not so much so again it was a good sign that they were being taken care of somehow.

I headed back to the ground floor as the dogs chose to remain behind and wait for the next cave guests.  Back on solid ground I visited the actual Wat of Ao Noi.  The Cave is simply where there are several Buddha statues, but the actual Wat isn’t in the cave, yet decoratively set along the base of the cave hill near a pond, the ocean and a monk community.  After visiting the Wat, I headed back toward my guesthouse back in Prachuap, stopping along the way at a very delicious (I should have gotten the name!!) restaurant with some of the best khao pad gai (chicken fried rice) I’d tasted anywhere.

I was quite shocked to learn that the whole trip only took me about 5 hours or so, including a leisure lunch!  I am generally quite a fast walker by nature, but even this surprised me!  One not so good outcome from having walked as far and as fast as I had, however was my feet.  It had been a long time since I’d actually worn my Keens and by the time all was said and done with the walking for the day, I’d developed quite a large blister on the bottom of my foot.  Luckily it hadn’t popped, but I wasn’t so sure the same could be said after the walk we had planned for the next day at Khao Lommuak…

On to Hiking Khao Lommuak

Stuck in Sydney and posting old photos I've taken with various camera phones over the years. To make it more interesting, now in Black and White with sarcastic commentary.