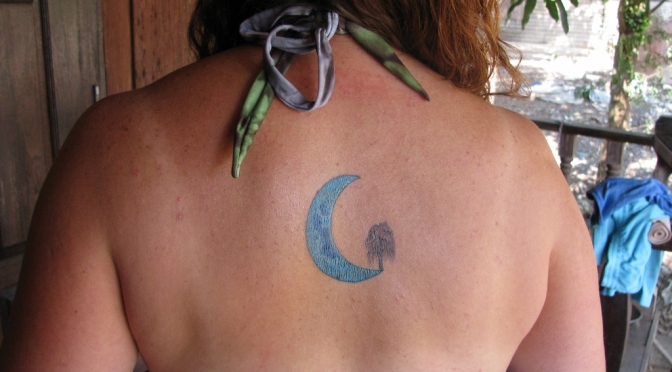 From my other posts about Sangkhlaburi, it’s probably easy to tell that it is a teeny little place and while it has a lot of the necessities, it lacks quite a bit as well.  We have no proper grocery store here.  The market is where you go for meat, veggies and fruit (which personally I prefer anyway) but for other necessities that are generally found in a grocery store, well, we have a place called CJ’s that has the basics and believe it or not, if it’s not in CJ’s, the other “grocery store” in town is 7 Eleven… Yes, 7 Eleven!

Kanchanaburi in contrast has proper grocery stores and even stores comparable to Sam’s Club or Costco.  They also have proper pet and vet stores where supplies are easily found for the shelter.  As some items were starting to run out at the shelter, it was time for a run to Kanchanaburi to stock up.  I went along with 2 other girls from the shelter for a weekend getaway.  We drove there in a truck lent to us by another gem of Sangkhlaburi, Dr. Mays, a dentist in town and avid animal lover and made the 212km trek to Kanchanaburi mid-day a week ago on Saturday.

J, one of the three on the trip, drove.  She is from the UK so was used to driving on the left and had amazingly picked up the Thai driving style as I had several mini heart attacks along the way dodging in and out of traffic along the road.  Due to traffic we arrived later than anticipated and missed the vet supply office hours.  So we simply headed to our hotel, took showers in warm water (there is no warm water in Sangkhlaburi for showers unless you shower in the middle of the day when the water has been heated up by the sun), put makeup on for the first time in a month and a half and headed into town.

I will say since being in Sangkhlaburi, I don’t think I’ve seen myself in a mirror except maybe two or three times.  So needless to say, once in a bathroom with a mirror in it, it was almost surprising and shocking to see myself, lol!!

We headed out and first had a drink and shared a pizza at Bell’s, then went to the Lady Boy bar for some more drinks.  Surprisingly the other volunteer (K) who tagged along for the weekend getaway after only 4 beers was already quite drunk!  Normally she can hold her own, but for some reason not on this night.  In any event, since there was more drinking to be done for myself and J, we continued on to the Monkey Bar for another drink.  Then…. Well… though I had stayed away from the “get drunk for 10 baht” bars during my last time in Kanchanaburi, we ended up stumbling into there as well…

In all fairness really it wasn’t myself or J stumbling, it was only K.  Jo and I had a delightful time taking shots and sipping on buckets of booze while K kept excusing herself to the bathroom to vomit… Joy!!  Since J and K had been to Kanchanaburi several times before for these types of excursions, they inevitably made friends with some of the locals, including a tattoo artist with a shop in front of the Sugar Member bar, just across from the 10 baht bar.  The night continued with lots of drinks, conversation, and many bathroom breaks for K.  She ended up going back to the hotel early and passed out outside the room on the lounge chair (since she didn’t have the key) while J and I continued to party until 4am.

Amazingly I woke the next day feeling great!  K and J, not so much…  We had to move rooms around noon (they put us in the wrong room the first night) so everyone was up in semi-good spirits around 11.  We jointly decided the best remedy for our hangovers was to have a yummy pizza yet again, though this time we were each getting our own to soak up the liquor, lol!!  We checked out Bell’s again (they seriously have a really good pizza!!) all craving the deliciousness we had the night before but to our dismay learned it didn’t open until 5pm!!

The idea was in our heads already however, and there was nothing to change it.  We were bound and determined to starve ourselves all day until Bell’s opened again!!  It seriously turned into a bit of a torture game and that day was the longest day I can ever recall!!  One would ask “what time is it” and learn it was 12:15… Then what seemed like forever later another would ask again the time only to learn it was 12:22 😦  The day went on like this with time slowing down just to mock us and as we didn’t have anything else to eat, the hangover symptoms started to even creep up on me!

What does one do to stave off a hangover??  You got it!  Drink more!  I caved around 3:30 and went to the bar at the hotel with K and proceeded to drink three White Russians.  Yum!!  It was definitely just what I needed to tide me over until Bell’s opened!  5pm FINALLY rolled around and we went for our indulgent meal of pizza with mushrooms and ham.  After dinner, K said she wanted to get a tattoo.  I, the night before, after meeting Joe the tattoo artist said I wanted to have him draw out a tattoo for me that I’d been thinking about for 7 years now.  So I tagged along…  J (the smart one) went back to the hotel for an easy night…

Well, of course since the tattoo shop was in front of a bar, we just had to get a bucket of booze to share!  I chatted with Joe about what I wanted, describing the design that I saw in my head and he set off to work as K and I got progressively more inebriated I kept checking back in with Joe every half hour or so to see how the design was coming along, giving input where needed.  About 2 hours later the design was done!  I really was thinking to just pay for the design and get the tattoo later, but then I started thinking “why not get it done now??”… Or maybe it was just the booze talking, lol!!  In any event, I bit the bullet and got it done! 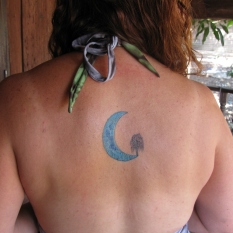 It’s still a work in progress as I want some shading done on the moon and a Japanese word written in the space between the moon and cherry willow tree, but nothing another trip to Kanchanaburi can’t fix 😉  I will say I was quite impressed with Joe as when I said I wanted a Japanese word written in he said “I don’t speak Japanese” (he’s Thai) to which I replied “Google translate!” to which he replied “are you sure??”.  He got me to thinking and I’ve decided that until I find someone who speaks fluent Japanese, and someone who is trustworthy, I won’t do the lettering.  I’m not going to lie, the tattoo was quite unpleasant to get!  I thought the booze would numb me up a bit, but no luck there:(

In any event, after I got my tattoo done, K got one as well even though Joe strongly advised against it since he deemed her too drunk to get one.  Eventually he relented and gave her the tattoo and after a bit of drama over her paying him for his services (she only had a quarter of the money it cost and instead of going to get more money from the ATM in front of 7 Eleven, she wandered INTO 7 Eleven and proceeded to read the wording on every package of items sold in an attempt to avoid (?) having to pay… Once that was sorted out and she finally paid Joe, we wandered back toward the hotel and passed out around 4am… again… lol!!

The next day we rose (K with a hangover) and finally got the vet supplies bought.  We stopped at a REAL grocery store to stock up on goodies not found in Sangkhlaburi (coconut oil, apple cider vinegar and tabasco sauce for me) then headed home.

In all honesty, I was a bit worried that when I woke that morning I would be a bit regretful about getting the tattoo.  But when I thought about it, I had no regrets.  No butterflies or tight feeling in the stomach when one thinks of something they wish they hadn’t done.  It’s still a work in progress of course and it still has to fully heal (the wrinkles will dissipate) but I’m happy I’ve got it:)

On to Spay Camp and Elephants

Australian Traveller that loves to "Roam" our globe, creator of ENDLESSROAMING.COM sharing the experience through word and photography. Currently residing in my home of Newtown Sydney