Katakolon itself is just a little port town.  Nothing terribly special about it per se; numerous restaurants and shops line the main street where tourists can wander and stroll in search of gifts.  Olive wood in particular is quite popular there, and I might add very beautiful! 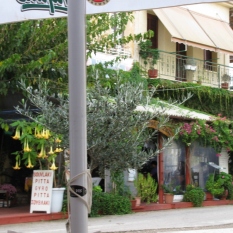 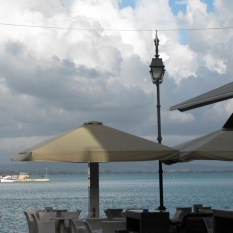 What puts Katakolon on the map as a port of call for cruise ships is that it is only about an hour drive to Ancient Olympia, the site of the first Olympic Games.  Olympia, as it is inscribed on the plaque out front “stood out historically as the most important Panhellenic religious, political and athletic centre of the ancient Greek world”.  It is rich in mythological tradition and was founded as the sanctuary of Zeus.  Structures include a gymnasium, greek baths, the Temple of Zeus, the crypt, the Temple of Hera and of course, the Lighting of the Olympic Flame.

While we had purchased tours for Ephesus and Santorini, we didn’t for Katakolon figuring it would be easy to just do our own tour.  In that regard we were quite right as the second we disembarked there were people lining the streets with signs for bus rides to Olympia.  We opted for one of the buses and headed out to Olympia.  Once there we immediately went to the ancient ruins.  My sister in particular wanted to see the ancient structure where they lit the flame for the Olympics. 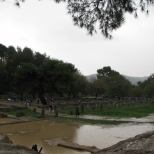 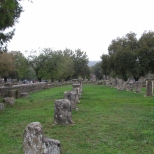 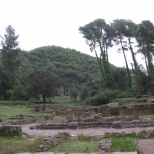 Thankfully we had heard before leaving the ship that there was a possibility for rain so we brought a poncho and an umbrella (won during a round of Bingo on the ship- but more on that in the ‘cruise critique’ post).

We made our way to the ancient ruins which were just around the corner from the main street of the now town of Olympia, paid for tickets to get in the site and started to have a wander around.  By the time we were at the ticket office, it was gently raining.  No biggie. 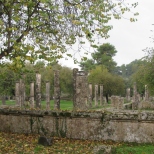 By the time we were basically in the center of the ruins, it began to rain hard… Then about 5 minutes later (only about 20-30 minutes after we had entered) it started to pour down rain!!  And thunder, and lightning and more rain!!  For those who know me, you know at this point I’m in 7th heaven as I LOVE a good thunderstorm!!  However, it wasn’t just me involved.  My dad and sister were with me (my mom decided to skip the Olympia trip and stayed behind to shop in Katakolon) so I wanted to make sure they were being taken care of.  My dad was using the umbrella and my sister and I shared the poncho.  I kept snapping photos of various ruins under the poncho as we made our way around to ensure that we saw the site for the lighting of the Olympic torch!

At one point the rain was so heavy that we (and all the other tourists there) started to huddle under the trees for a bit more shelter… Not the best idea with lightning around, but hey, strength in numbers?? 🙂  The rain kept pouring but what made us all start to leave the site wasn’t the rain exactly, but that it was starting to flood!  The umbrella and poncho did little to really protect us as we were getting soaked from the feet up.  My sister and I, concerned for our dad, decided we’d better head back.  It took us probably 10 minutes to find a shelter where we could fit (most of the close ones were already taken up by tourists) and that wasn’t flooding out.  We only stayed under the shelter for a few minutes then decide to keep going back to town.  All three of us at a certain point just started walking through the water instead of trying to skirt around it, since we were already wet! 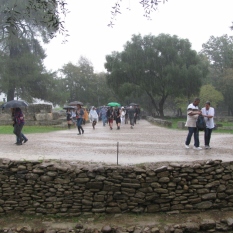 We finally got out and back to town, drenched and chilly, but generally in good spirits!  Since we kept walking to town instead of stopping longer for shelter, we were among the first people back to town, which gave us first dibs on chairs in a restaurant with lovely outdoor heaters!!!  We huddled around the heater, ordered some drink and food, and listened to the rain pour down all around us.

We thought it rather ironic that we had gone just the day before from a place that barely got rain (Santorini) to a place that was now pouring with rain, lol!!

One funny observation my sister made at the restaurant was from a picture in the menu.  It was advertising an Amstel natural brew Radler beer with the caption: “Natural Beer with non-alcoholic lemon”.  My sister then said “hey, look.  They have alcoholic lemons here!!” LOL!! 🙂

After enjoying our meal, the rain had basically stopped but as we only had about a half hour until the bus was going to pick us up again, we opted to hang around town.  Once on the way back the skies turned blue and remained that way until we boarded the ship again.  Go figure!  But there’s my reason to go back:)  AND we did at least get to snap off a photo and see the site of the lighting of the Olympic torch:).

On to Cruise Critique

Australian Traveller that loves to "Roam" our globe, creator of ENDLESSROAMING.COM sharing the experience through word and photography. Currently road tripping across the USA