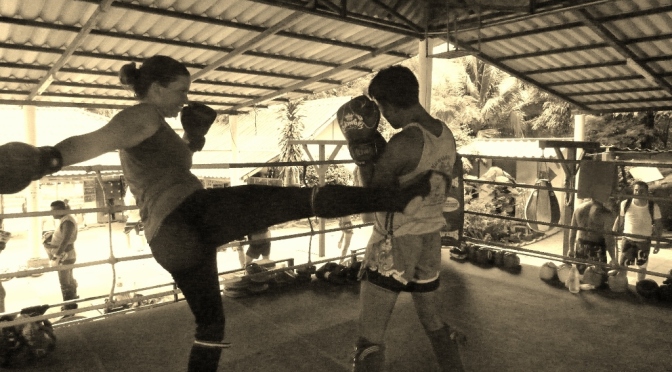 Part of the reason I wanted to stay for a month on the beautiful island of Koh Tao, Thailand was so I could dip my toes a bit in the world of Muay Thai Kickboxing.  Though I’m not in perfect shape, I do really enjoy working out and try to get workouts in daily, even when traveling.  As any fitness fanatic knows however, the best way to stay on top of your fitness is to mix up your workouts.  Since I’m in Thailand, I figured why not give their traditional martial art of Muay Thai a try?

I did not originally come to Koh Tao expecting to stay so long.  I had the idea that I would “if and only if” I found a Muay Thai gym I liked.  On the island there are actually two gyms that offer Muay Thai training.  Monsoon Gym and Island Muay Thai.  I checked both places out, dropping by during their training hours just to get a vibe of each place prior to committing to either (if at all).  Dropping by during training hours was purposeful because I wanted to get the sense of two things: first a sneak peek at the training and how the trainers interacted with students (my trainers test) and second to see how I would be greeted during a busy time (my management test).

On the surface, my observations were as follows.  While Monsoon Gym doesn’t have a ring, it has a very impressive workout and training space.  The practice area looks brand new and their gym (to get in weight or extra cardio workouts) is also quite nice!  In addition, they offered a variety of classes such as capoeira and crossfit type classes that you could mix in with the Muay Thai training.  They even offered on-site dorms as accommodation (for an extra price of course) to those training with them.  It was evident that a lot of money was put into the place.

By comparison the Island Muay Thai training facility did have a ring but their training area looked rather used and broken in, so to speak.  Their gym area to get in extra weight or cardio workouts really wasn’t anything to write home about as it had outdated machines and not a huge variety of weights.  Whether the gym had a ring or not was not a concern or care to me as I had no intention to fight, only to train for fitness.  So on the surface Monsoon gym had me hands down (especially since they offered more of a variety of fitness classes).  However one huge difference between the two gyms led me to make my ultimate decision.

They say first impressions are the most important.  And as far as I’m concerned, they can make or break a person or business.  Monsoon Gym, while impressive visually, fell flat on its face when I popped by to check the place out.  It had the feel of where the cool kids and cliques hung out.  I stood around for about 10 minutes waiting to get the eye of someone (anyone) who worked there to ask questions about the courses.  Of course there were posters everywhere giving pricing information and such, and while I technically got all the info I needed just by looking at the posters, my point in going in personally was to get the feel of the place and people.  And based on that aspect, I was not impressed.  I finally struck a conversation with a random person hanging about who had been training there and talked to him about the place.  He was actually very nice and informative and had nothing but praise for the place.  But when he pointed me in the direction of one of the people who worked there (a falang whose exact role I can’t recall) and I went to chat with her, the welcoming was icy and indifferent.  I should mention however that based on my observations of the trainers themselves, I had no negative impression as they seemed very engaged with the students. 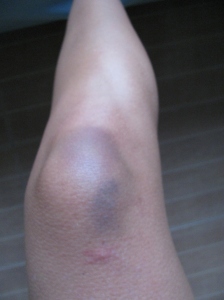 On the contrast was my impression of Island Muay Thai.  Again I showed up during training hours and was immediately greeted by someone (who turned out was the owner) with a flyer listing prices and giving information.  And again, while visually the place was lack-luster compared to Monsoon, it felt more serious and more focused.  It had that wholesome “come as you are and let us kick your rear with a killer workout” feel that inspires me to work hard.  Also the vibe felt comforting and made me feel confident to simply show up as I was (even with several extra pounds to lose!) and not feel embarrassed that I wasn’t in perfect shape.  And to boot I was actually acknowledged as I came up to the place!  To me, the vibes between the gyms were night and day and I very happily (after finding a place to stay) signed up with Island Muay Thai for a month.

For the past month now, I’ve been going to Island Muay Thai about 4 times a week.  Between working out there and going there for the fight nights (every 10 days!!) it’s practically become a second home to me, lol!  I arrive a little before 8am to get in about 5-10 minutes of stretching, then hit the jump ropes for anywhere between 5-10 minutes, then it’s time to get the hands wrapped and the gloves on for training.  Depending on the trainer, the sessions can go in a variety of directions:  3 minutes on, 1 minute break or up to 10 minutes on and several minute breaks.  Either way the end result is always the same: I leave exhausted, super sweaty and ready for a cold shower!!  What I appreciate most is each trainer has their own focus, or specific set of things that they watch out for, or area of expertise.  What that boils down to is that I learn something new each and every time.  And each criticism from the various trainers compliment each other too.  So learning one specific stance or technique from one trainer compliments what you’ve been taught by another and so on.

I’ve injured myself a bit here and there (blisters, bruises, and feeling like my feet were broken) along the way due to my being exhausted and using improper technique, but I love the training!  They push me to work harder each time and the training is unlike else I’ve done so far.  I sweat buckets during each workout and sometimes feel like I could either pass out (because I’m holding my breath during the punches or kicks) or vomit by the end, but I still show up and am even staying for yet another month so I can train on 🙂  This time it will be 5 days a week just to see how much more fit I can get with it. Let the games begin!!

On to Unique View of Muay Thai Training

Australian Traveller that loves to "Roam" our globe, creator of ENDLESSROAMING.COM sharing the experience through word and photography. Currently residing in my home of Newtown Sydney but hope to be back on the road late 2020. Feedback / questions are more than welcome, happy travels